Drawn to the Country

Since moving to the country just over a decade ago I have been compelled to record the beauty I find in the every-day, as the seasons come and go, and for a few years now, I have been sharing my thoughts and sketches on rural life through this blog.

I am, however, also a big fan of printed matter, of proper books with paper pages that can you can flick through over morning coffee. Books that will spend an evening with you on the sofa, lodge by your bedside or cheer up a good friend.

With this in mind, I'm really excited to announce the publication of DRAWN TO THE COUNTRY. 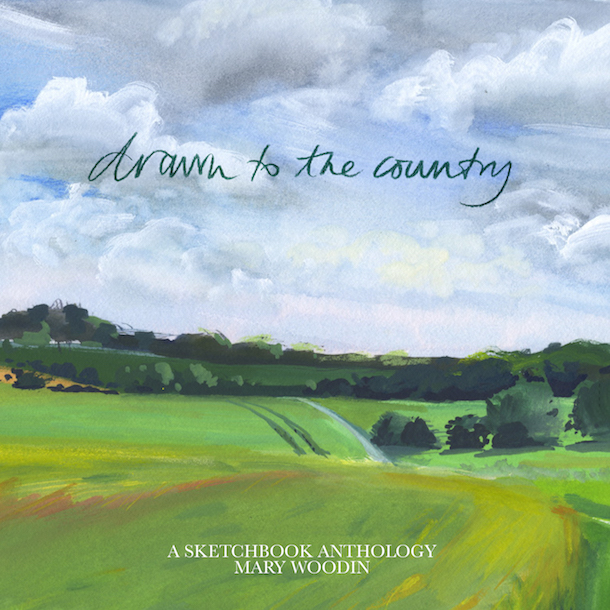 Arranged seasonally, over 128 pages, the book takes you through the delights and challenges of a year in the Suffolk countryside... You'll hear about my gardening exploits, be introduced to my chickens, meet some extraordinary Suffolk characters and take some day trips to the coast and beyond!

"Mary has beautifully captured the unique character of my home county Suffolk in this delightful book."
Paula Pryke OBE, Florist

For more info, and how to purchase, please visit www.conkerpress.com 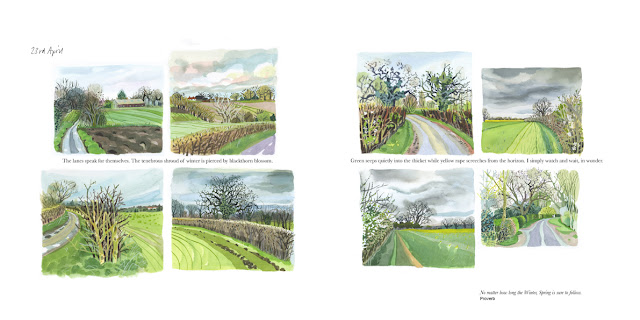 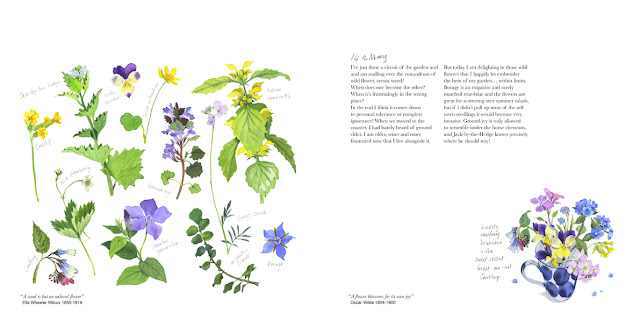 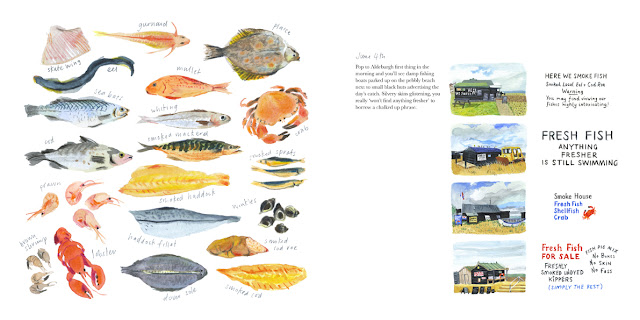 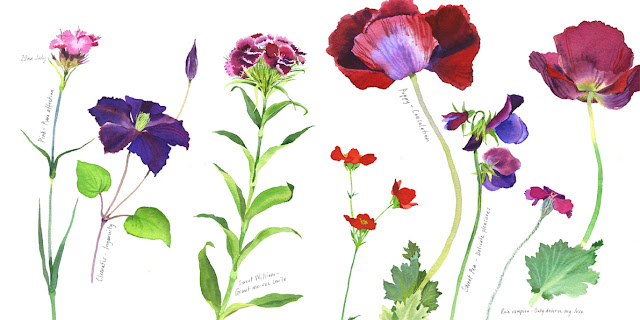 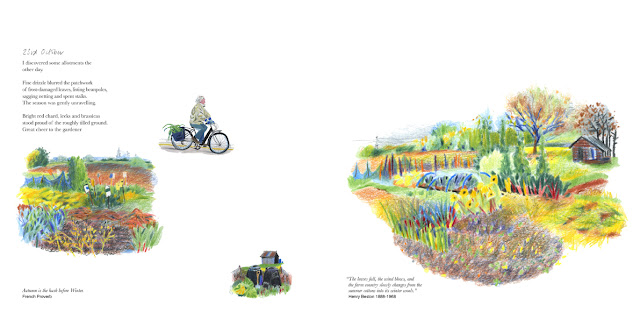 It has been positively Mediterranean in Suffolk this week.
I have not minded the odd imposed detour on my travels.
All the better for soaking up the glittering landscape. 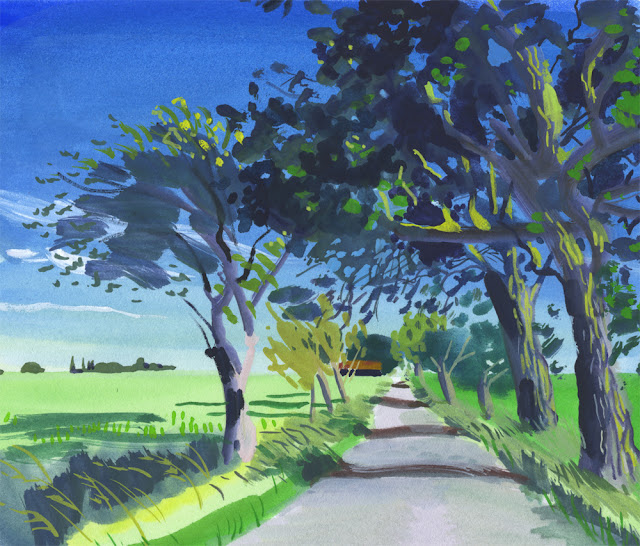 “Roadworks” in Suffolk often means that a three kilometre stretch of road is completely barred to
traffic for a week to enable the methodical filling of a few potholes.

The upside is that I had to take a diversion on the way to the gym yesterday.
I discovered a winding lane fringed with barley, ears bent to the tune of the breeze
and gleaming in the sun on the cusp of the hill. 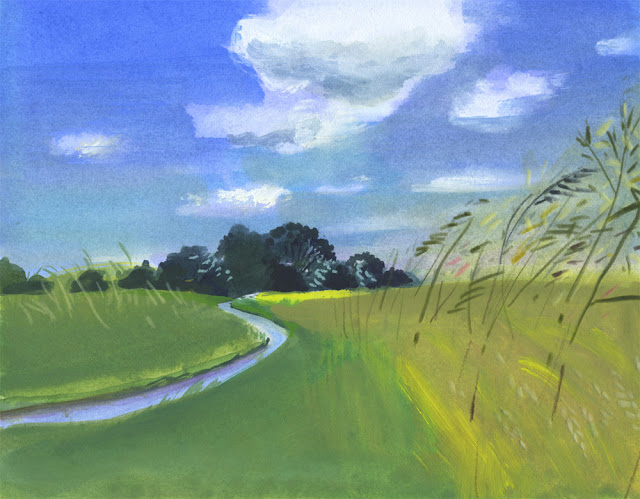 Welcome to the cow shed

One of the drawbacks of living in the country is getting from a to b. Scant public transport and winding roads can mean a lot of time spent behind the wheel. But I treat this as an opportunity to revel in extraordinary skies, keep abreast of crop rotation and appreciate the richness of East Anglian architecture.

Time permitting, I would also mention that there are glorious surprises in store if one takes a spontaneous trip down a stony drive to investigate one of the many chalked up roadside placards. Sunday was no exception. I had completed my parental taxi duty and it was such lovely evening I decided to take the circuitous route home. I was soaking up the beautiful mackerel sky when I saw a sign that said ‘raw milk fourth left’. 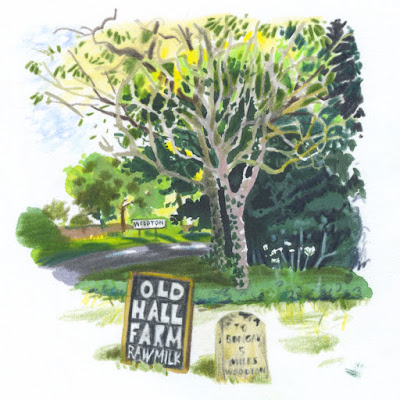 It was a long drive. 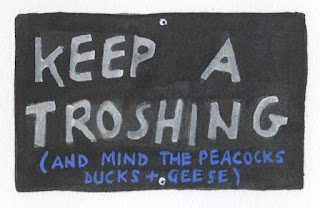 Keep a troshing??
Norfolk dialect for carry on with the threshing, roughly translated as keep going! I think.

Anyhow, I kept going.
Past lawns peppered with geese and peacocks. 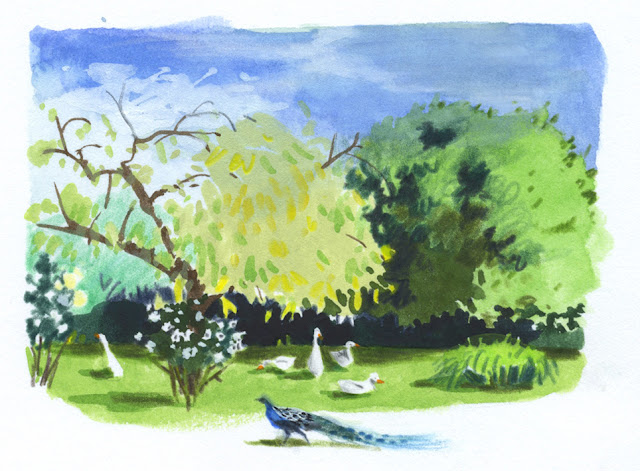 To a little wooden shed, with a fridge, an honesty box, and deliciously creamy raw milk,
straight from the udders of six beloved Jersey cows named after Goddesses. 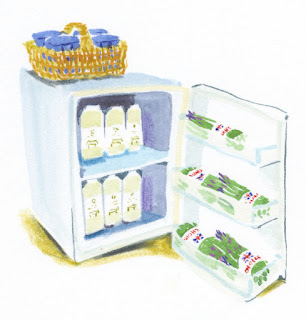 Yes, I’ll be volunteering for that taxi run every time! 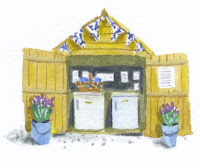 Keep up with the developments @Old Hall Farm, Woodton, on social media,
there are plans afoot for more local produce in a bigger shed!

"Every particular in nature, a leaf, a drop, a crystal, a moment of time is related to the whole, and partakes of the perfection of the whole."  Ralph Waldo Emerson

This weekend I barged my way into a lot of borders. I wriggled under prickly raspberry stems to tug out buttercups and squeezed between the black elderflower and a red brick wall, to prise out nettles. I felt cumbersome and clumsy, my giant clodhopping feet pushing plants aside every step.
But as I became absorbed in my task, and began to piece together the subtle comings and goings of the intricate world I had imposed myself on, I began to feel very humbled and very small.

Just above my head, the remnants of an old blackbird’s nest were slipping through the vines of the clematis. I remembered last year’s fledglings, beaks relentlessly open.
Tucked behind the base of the clematis were a heap of empty snail shells, hollow fragments of a passerine feast.

My trowel uncovered a couple of split walnut shells, so that’s where the squirrels hid them. 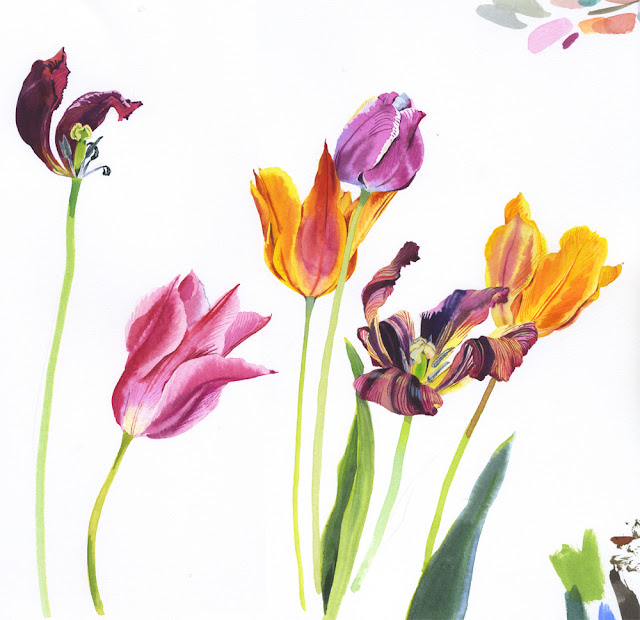 As if to confirm my suspicions that nature doesn’t depend on a gardener's meddling, even my favourite tulip this year was one that I didn’t plan. A cross-pollination resulted in an exquisite cream and red striped bloom. And in decline, it is still beautiful.

No matter how long the winter, Spring is sure to follow.
Proverb 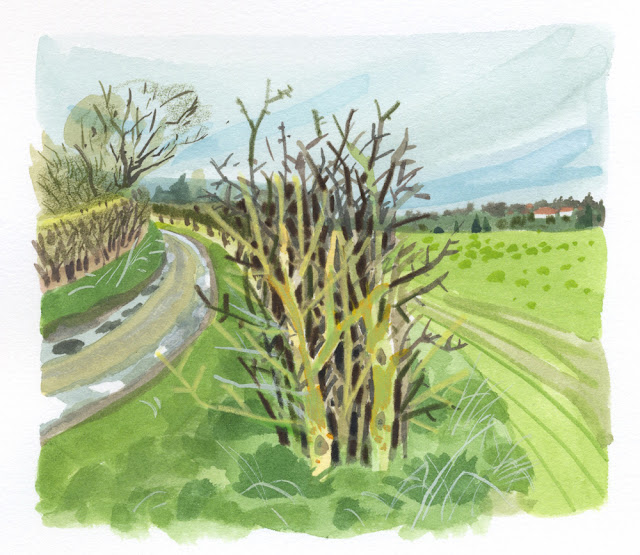 The lanes speak for themselves, 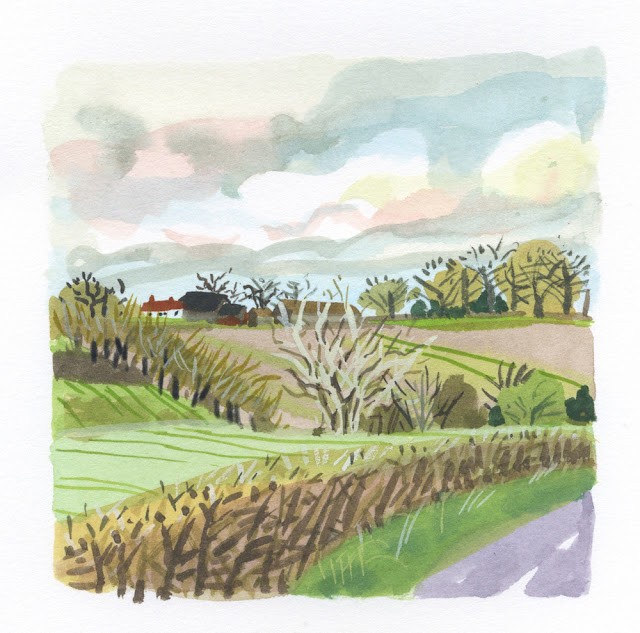 The tenebrous shroud of winter is pierced by blackthorn blossom. 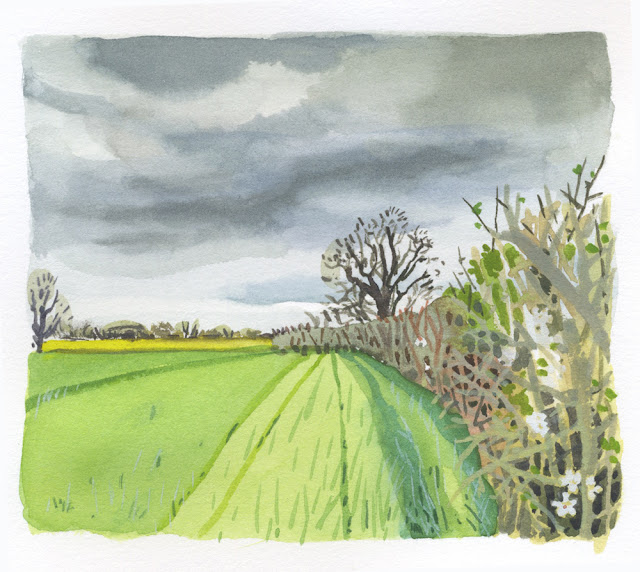 Green seeps quietly into the thicket while yellow screeches from the horizon. 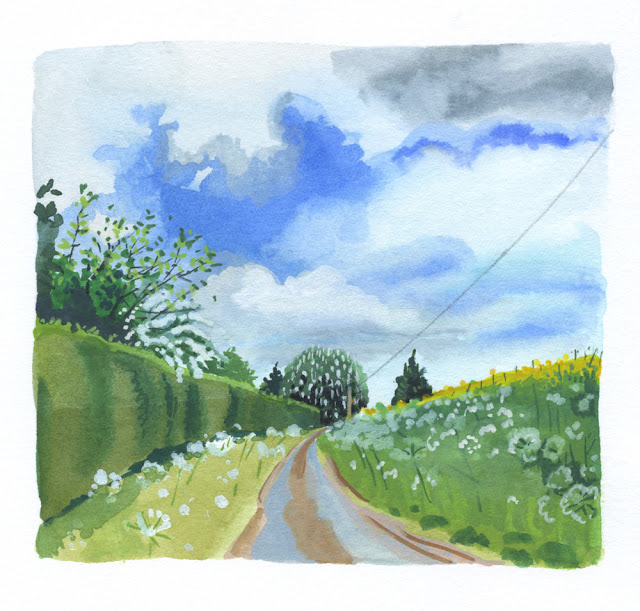 I simply watch and wait,
in wonder. 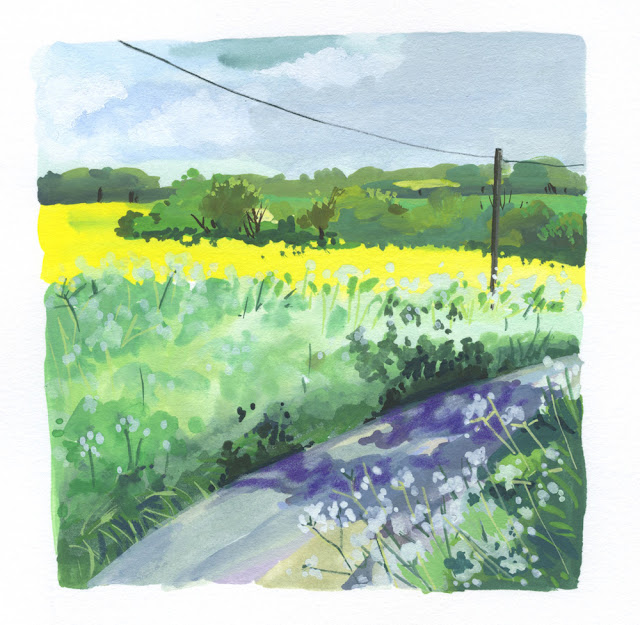 Welcome to the wild flowers

"Nothing is a better lesson in the knowledge of plants than to sit down in front of them, handle them and look them over just as carefully as possible; and in no way can each study be more pleasantly or conveniently carried on than by taking a light seat to the rock-wall and giving plenty of time to each kind of little plant, examining it closely and asking oneself, and it, why this and why that." Gertrude Jekyll

In my previous post on weeds, I was perhaps a bit harsh in my condemnation, coloured by a long day of filling my barrow with unwanted vegetation. A weed is, after all, merely a wild flower in the wrong place.

There are plenty of wild flowers that unbidden weave their seductive charm through my garden and I cherish them for that.
I promise they won't end up in my barrow... unless they get too unruly! 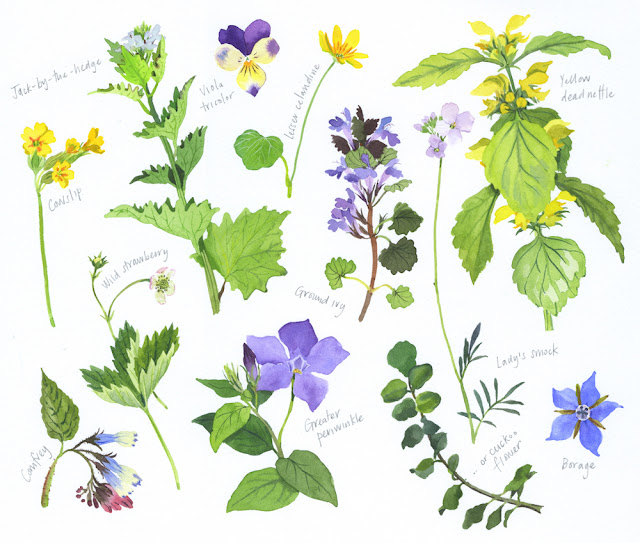 "Weeding is a delightful occupation, especially after summer rain, when the roots come up clear and clean. One gets to know how many and various are the ways of weeds - as many almost as the moods of human creatures. How easy and pleasant to pull up are the soft annuals like Chickweed and Groundsel, and how one looks with respect at deep-rooted things like Docks, that make one go and fetch a spade."
Gertrude Jekyll 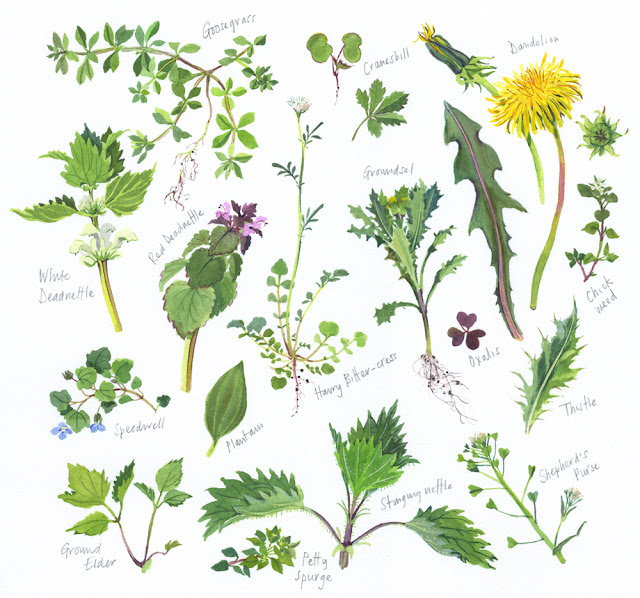 Sadly, I barely had to venture further than a few yards from my back door to gather this assortment of weeds. I would have preferred to boast that I had to search high and low and long and hard to find them.
Jekyll is right, they are many and various.... and fascinating to observe closely. So many different leaf shapes and growth habits.
How wonderful is our native British flora... just not in my flower border please!
at March 30, 2017 No comments:

The vagaries of March

"It was one of those March days when the sun shines hot and the wind blows cold:
when it is summer in the light and winter in the shade." 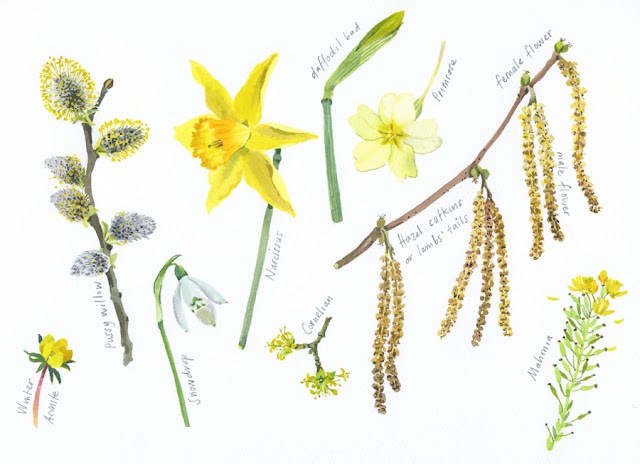 ....summmery enough for me to skip round the garden to see what's in bloom! 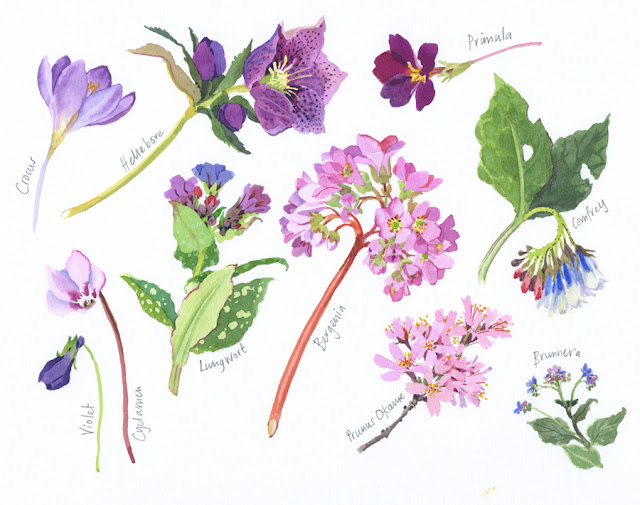 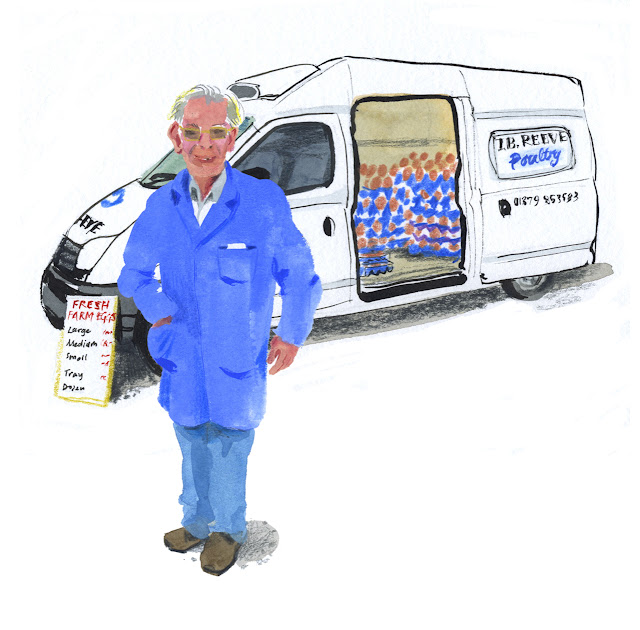 On an ‘out and about’ day recently, I found myself in the pretty centre of Wickham Market. I was mesmerised by the 700-year-old octagonal flint church tower with its soaring lead spire.

More urgently, I was in need of a cash machine. I asked a gentleman who looked as though he had lived in Wickham for a hundred years if there was a Bank nearby. He straightened his stoop, adjusted his cap and looked misty-eyed into the distance. After a long pause, he explained that he had just been trying to calculate whether it was thirty, or forty years ago that the last bank in the village had closed its doors for good.
I thanked him for his time.

Wickham Market, I then discovered, has a distinguished connection with currency. In 2008 one of the largest iron age coin hoards was found in a field near the village totalling 840 pieces of gold.
So, my elderly friend, there must have been a thriving bank 2000 years ago!

Wrapped up in thoughts of yesteryear, I then called in at nearby Deben Mills. Founded by Mr. Rackham in 1885 as a water-powered mill, his descendants continued to produce stone ground flour until 1970. Still a family run business the mill now trades in coal and animal feeds. Even better, a handwritten sign stuck to the till advertises free bagged horse manure. So I came away with a steaming car boot full, despite still not having any coins in my purse.

That got me thinking, on my way home, about the joys of bartering. The horse manure was destined for my rose bed. The roses I had gained in exchange for a painting. I have been known to provide hot dinners in appreciation for gutter repairs.

Only last week I met an old friend for lunch. She greeted me with an offshoot of a plant I had once admired in her garden and a book that was the casualty of a de-clutter. For her, I had brought homemade chutney and freshly laid eggs.

For a fleeting moment, I had a vision of myself as an old lady in a market square, wistfully reasoning that I haven’t needed a bank in years!

Another grey day.
It’s not raining but it’s so foggy that the air is dripping with moisture and beyond a few metres the world is a blank canvas.

It feels consoling to hunch indoors and distract myself with seed ordering but there are rewards to be reaped beyond the back door.

Amid the quiet stillness, seasonal treasures are heightened. A woodpecker’s drumming is reverberating through the poplars and I spot a few gleaming aconite buds as I plod up to the veg patch to find parsnips for soup. 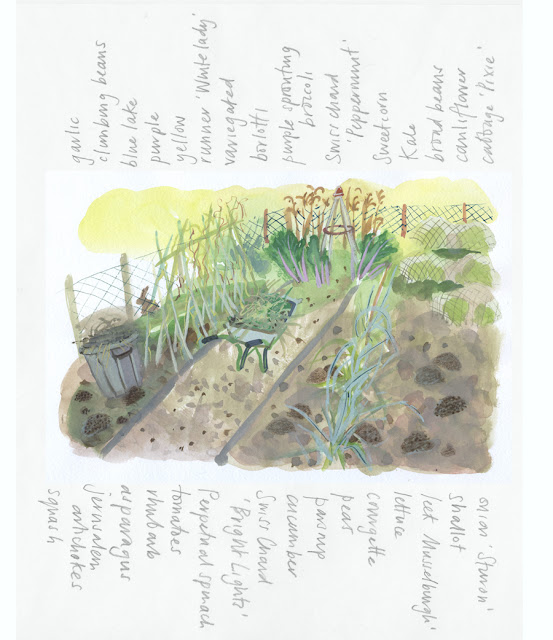 Hundreds of fieldfares scatter noisily in acknowledgement of my rude interruption, white bellies melting quickly into the mist above my head.

At my feet are dozens of molehills, soil fresh, dark and crumbly. Maestro of labyrinthine activity, his stealth has not been dampened by the weather.

All I need now is for the cats to prise themselves away from the radiator and earn their keep with some mole trapping!

"I paint flowers so they will not die" Frida Kahlo "Their beauty is beyond dispute. No velvet can rival the ...

Images © Mary Woodin unless otherwise stated, please do not use without permission.